A downloadable game for Windows

Vampires are creatures that live amidst the darkness of eternal night. They have absolutely no regard for human lives and treat them like stones to be kicked away.

One night, a girl was running in a forest while being chased by three bandits. Then a black-clothed man passed by and subsequently took them down easily. The girl, who thought she was saved by him, wanted to repay him and thus invited him to her village.

......The man, who was actually a vampire, smiled and accepted her invitation. After all, the more prey, the merrier......

Nocturne: Rebirth (月夜に響くノクターン Rebirth) is a popular 10 to 20-hour (story-wise) dark fantasy JRPG originally created using RPG Maker XP in 2009 by Shou (or Cogwheel) and translated into English by me, eplipswich. It is actually the remake of the game Nocturne created using RPG Maker 2000 way back in 2002. The differences between the two include new graphics and a new battle system, with only the story virtually unchanged. This version serves as the English version of Nocturne: Rebirth. It is also my second game translation after Seraphic Blue.

Nocturne: Rebirth is notable for

- Characters that players can sympathize with

and so much more!

You can view playthroughs of this game below:

And for the curious, here's the TVTropes page of Nocturne: Rebirth (thanks Bugfragged for creating the page!).

Also, check out my alternative Tumblr site for my translated games here.

And to top it off, have a go at listening to OSTs of the game here.

Here's my review of the game. Note: I'm terrible at explaining things so I'll just write what I feel and try not so sound biased as best as I can.

Gameplay: The gameplay is your standard turn based rpg with its own twists here and there. The use of animations and stylish flourishes helps make the battles feel more dynamic even though you're just inputting the same commands. There was a wide variety of spells and skills you can switch at any point in battle on the fly thus opening up new strategies and possibilities, its an added bonus that it didn't cost a turn which might be a good or bad thing depending on the person and point of view but I appreciated that mechanic as it made gameplay easier and lot less stressful.

While the gameplay is fun it does require a lot of grinding if you don't want to be overwhelmed by enemies mainly bosses so if grinding isn't your thing you might not enjoy the game. if you can look past the grinding I'm sure you'll have a great time playing it. It helps that the encounter system is touched based and not random encounters allowing you to choose when to fight and allowing you to explore unhindered.

Mechanics: The mechanics were fascinating and simple enough to learn although it took a while to fully grasp them(might just be a me problem). From the familiar system that lets you turn enemies into allies to the level up system which allowed you to control which skills you learn and the stats you develop they were all enjoyable and once you learn how it works you can tailor your party and character to be the best it can be and you'll find yourself beating enemies left and right with your ideal party set up.

The game does have puzzles which are fairly simple to solve however there were some that just seemed impossible to accomplish or the path just wasn't made clear enough(this might just be me). What i really appreciate was the option to skip them entirely and destroy the obstacles at the cost of experience giving the player a new layer of decision making.

Soundtrack: The soundtrack while feeling like your standard type of JRPG OST was still wonderful and pleasant to listen and each and every artist involved in the soundtrack did a splendid job and their talent truly shines in this soundtrack. The looping of tracks could've been done better and made more seamless but that's just a minor nitpick and it didn't take away from my immersion. As the story progressed certain tracks would change keeping the experience fresh and avoiding repetitiveness in the soundtrack, as a result I didn't get bored by the soundtrack.

Characters: While very few, the characters were interesting and captivating with their personalities and behaviours. I personally found them to be well written and each character had been decently fleshed out. The protagonists were likeable and charming, the villains were proactive and helped drive the plot forward although certain elements did come out of left field without much build up but it was not too jarring and it was still consistent with their character for the most part. The NPCs felt somewhat alive and weren't just bland placeholders although I feel like they could've had a few more pieces dialogue but they were fine as is and helped build the world as they would comment on current events and progress with their lives.

The monster designs were pretty nice and while most were pretty much reused and recolored they still felt unique and well designed.

Appearance: For an RPG maker game the graphics were pretty decent and the designs were not that bad. The level design was satisfactory and dungeons were well designed and the places were easy to navigate. Not much to say here as everything was pretty standard.

Story: The story was engaging and very enjoyable despite being very linear. There were lots of twists and turns to keep you engaged and pacing was decent enough to not have any issues although like i said in my characters segment some things came out of left field with not much build up but the following events were satisfactory enough to let it slide. each character is utilized well enough and has their time to shine in the story and the world building and revelations were executed well. You'll be in for a wild ride with the story.

Overall i found the game to be very enjoyable and engaging, the grinding is not too bad, the animations in the gameplay made it feel fun to play and the overall vibe of the game was captivating for me. Nocturne Rebirth is a game that's worth your time and its free so it won't cost you anything. Thank you Eplipswich for the translation you're awesome.

Hey I installed the fonts but it's still not showing, help

Just started playing but I just wanted to give a short first impressions:

This game tingles the nostalgic bone, it reminds me a lot of old handheld console JRPGs, especially with the writing (Which is nicely translated!)

The Battle system so far is classic ATB, with all the flourishes of a customized RPG Maker engine. It's very satisfying, and I love the animations and dynamic camera.

If you're a sucker for old JRPGs, I definitely recommend!

P.S. I'll give a proper rating when I finish the game.

Luna needs herb to give her mother for the next meal. I tried finding it in the forest of origon, but failed. How do I obtain the herb? (herb gotten from Cuty cannot work.)

How to I end free time?

Hello, I have some trouble with running the game.

I have been trying desperately to make it work. I installed  fonts, i change uni-code language to english, i installed Legui, but nothing seems to be working... Before I tried using legui but the text still not appear. When i changed language on computer settings the game even stopped launching...

Is there anything I can do? Or is there another version of the game?

Game looks so cool, yet I cant play it...

I just played the beginning, and there is way too much dialogue. I feel 95% of the game is just continually hitting Enter to skip the dialogues. This is obviously completely uninteresting and important information is drowned in the mass.

Dude this is an amazing game, RPG Maker gets a bad rep but the moment I saw the title I knew this was a really well polished game

Hi!! I have downloaded the game today—and I am currently having an issue regarding the dialogue being not visible at all no matter how much I reinstall the game itself. The game looks interesting and I'd like to give it a try. Hope you can help me. :) 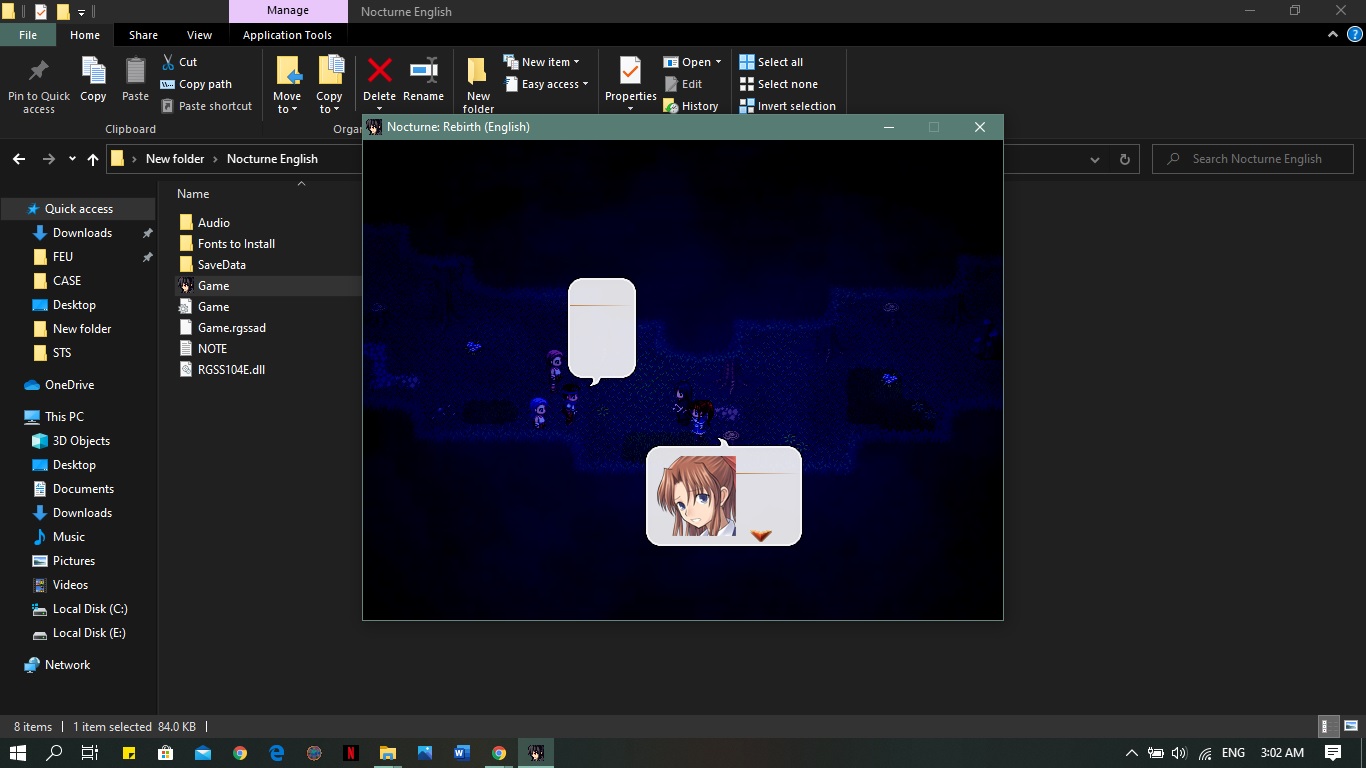 Did you install the fonts in the "Fonts to Install" folder?

About time I find a game that has some similar elements like my own game I am making.

To anyone looking for a fun, hard and beautiful rpg with a great story and combat.

Also summoning features and more. This Game here is for you.

Played it a good 20 hours if you grind and explore anything it is probably 40 hours long.

It has some learning curves and some rng things that are anyoing (need balance).

But overall this game is one of the best rpg maker games I played. (=

I just want to say "Thank you!" for posting such an great game for free!
Since I'm on my own playing around with an RPG Maker - I wanted to see how people - far more professional than me now - design theyr game, to get a clue what a one person project could be able to become.

I have to say you inspired me a lot in terms of creating own artworks to make a game more personal. I have loved all the little details, like an character who's drank a tiny cup of coffee, to get a better coversation atmosphere.

The howle game was fun to play and the cutscene artworks were - for me - the icing on the cake and fit very good in there - it was beautiful - realy - I loved it!

So thanks again! :D
(Hope you're able to understand what I wanted to say - I can perfectly read english but
have never learned grammar - sorry xD)

I really like this game. It took me to finish about a week. I want to play it again, but it doesn't want to open :(

The game is not frozen, but yet clicking on anything in the menu will not let me actually go into the settings or the game itself. Puzzling, considering others have played it. This is the first game on itch to do this for me. Has anyone else had this issue?

Can you please make cheat mode for people who hate grinding, like me? I like story, music, desing of character and atmosphere in general, but I hate battles.

The Most Amazing Game Ever!

Ever thought about a remake for this?

Hey, can I ask you something?

I can't believe I'm on my 51st episode of your wonderful game! I gush about how great you guys did at the end. Well done!

Just finished part 23 of my lets play of your game and I absolutely love it! I even had my friend download it and he cant stop playing it. Definitely been a while since I've gotten into a story like this. My voices are cheesy, but its whatever, the point is to have fun!

Keep up the damn good work.

I need some HELP here please, there something wrong with the saving data TT~TT

Thanks for making this accessible (English)! I often recommend it to others. Have not finished it, but it has been quite a fun experience thus far. :)

Why is there no other games like this?
Cause it's unique :)

pretty good game concept like Reviel character, double sword fascinating?  Sometimes I wonder why there  no more games like this?

Is this was made in VX Ace, I would of wanted to help port it to MV.

Was this made in VX Ace?

Just looking at this game makes me love it already! I'm looking forward to playing ^_^ 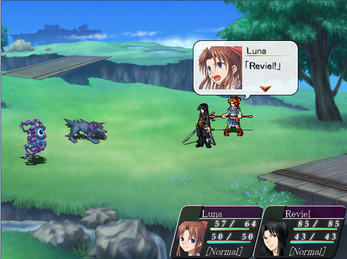 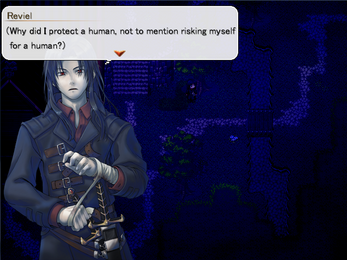 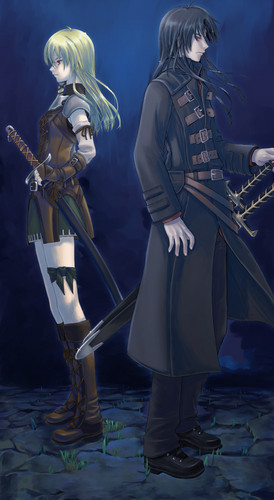 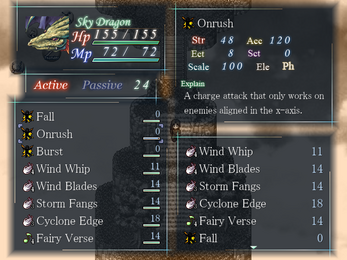 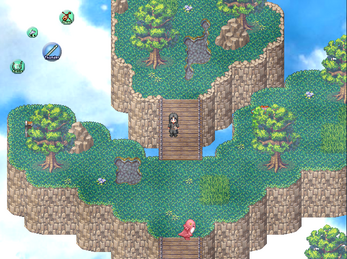